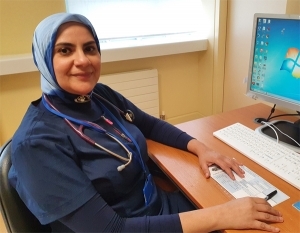 A graduate of Royal College of Surgeons in Ireland in 2002 and subsequently trained in Respiratory Medicine and General Internal Medicine (GIM) in University Teaching Hospitals throughout Dublin and Cork. Dr Amani El Gammal has completed an MD thesis in COPD and pulmonary rehabilitation at University College Cork in 2013. She received her Certificate of Completion of Specialist Training in Respiratory and GIM from the Royal College of Physicians of Ireland in 2013 and subsequently completing two years clinical fellowship at McMaster University, Hamilton, Onatario, Canada focusing on severe asthma research and management. She was appointed as a Consultant Respiratory Physician in Naas General Hospital in 2015.